UNIQUELY LOCATED IN THE HEART OF JAKARTA BAY’S DREAMLAND

Discovery Ancol, 4 Star Hotels is Indonesia providing a convenient base for family, friends and colleagues with the modern interpretation of the stylish contemporary design and elegant furnishings in neutral tones. Engage yourself with impeccable surroundings, undeniably welcoming, be captivated by all the attractions which Ancol Dreamland Park has to offer. Only 25 minutes drive from Soekarno-Hatta International Airport, 5-10 minutes from Jakarta’s famous shopping districts, including Pasar Pagi Mangga Dua and Glodok Electronic Center, a short beach-drive to the happening Lifestyle and Entertainment of ‘Ancol Beach City’, located side-by-side with the most famous attraction in Ancol ‘Dunia Fantasy’ and with Eco Park featuring rope courses, paintball range, petting zoo and jogging/cycling tracks – and the wellknown Pasar Seni art village – this hotel is the perfect place to enjoy the Jakarta Experience away from, but so near to, the huzzle and buzzle. Marina Ancol with daily scheduled boats to the beautiful 1000-islands is accessible just across the road.

Our spacious and breezy rooms look out onto sweeping views of the marina or pool, the bustling activities at Dunia Fantasy and partly also to the Ocean on the higher floors. Put together with the art-gallery like ambience, the hotel’s warm hospitality touch and service, the unique Discovery Ancol experience is nothing less than extraordinary. Discovery Ancol offers a collection of luxury suites ranging from Deluxe Suites, Premier Suites and Executive Suite a luxuriously spacious Presidential Suite as well as the stately and opulent Discovery Suite. 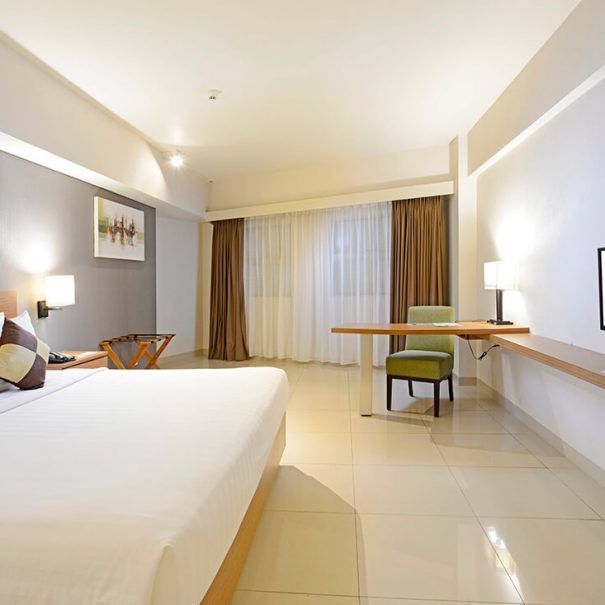 Twin beds and double (king-sized) beds are available for individual or group booking. 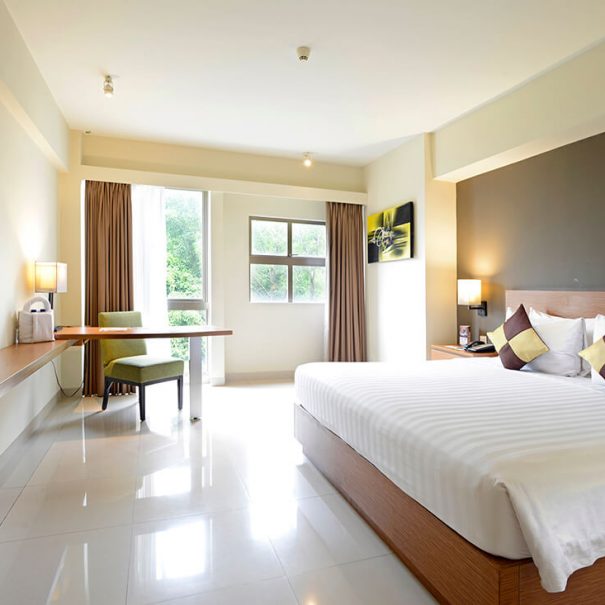 138 Deluxe rooms with 28,10 square meters are suitable for individual or group booking. Twin beds and double (king-sized) beds are available. 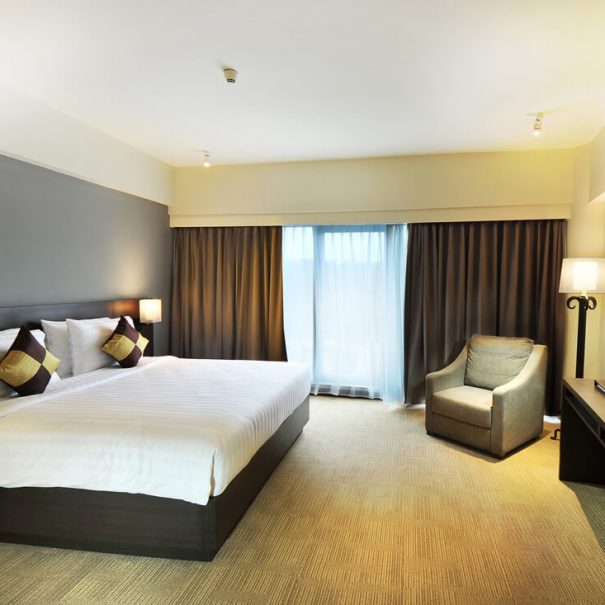 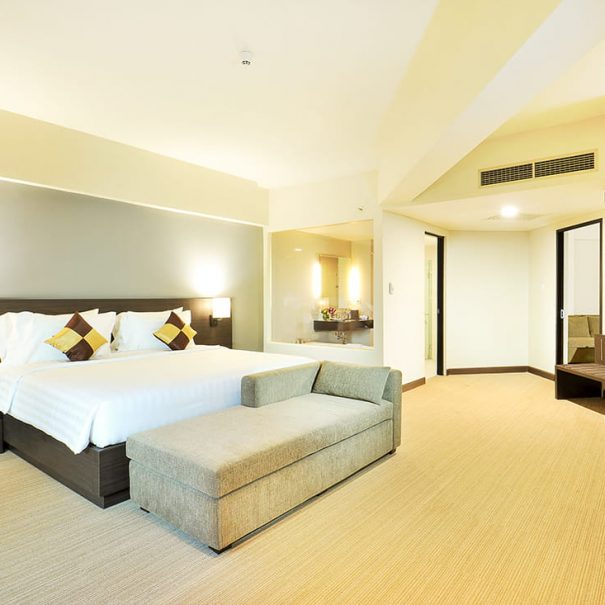 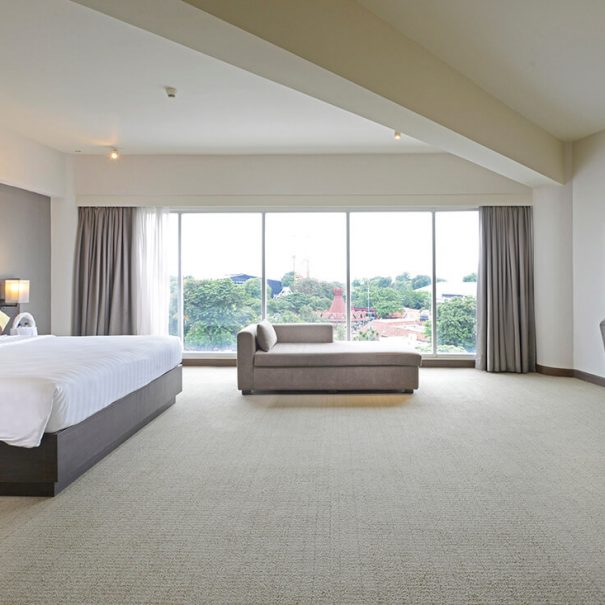 3 Premier Suites with two bedrooms and living area are very spacious, around 113 square meters with a spectacular view of Dunia Fantasi, pool or city. 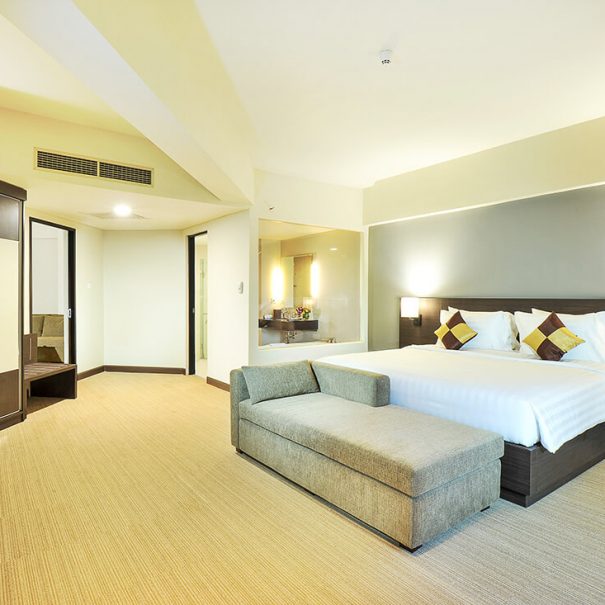 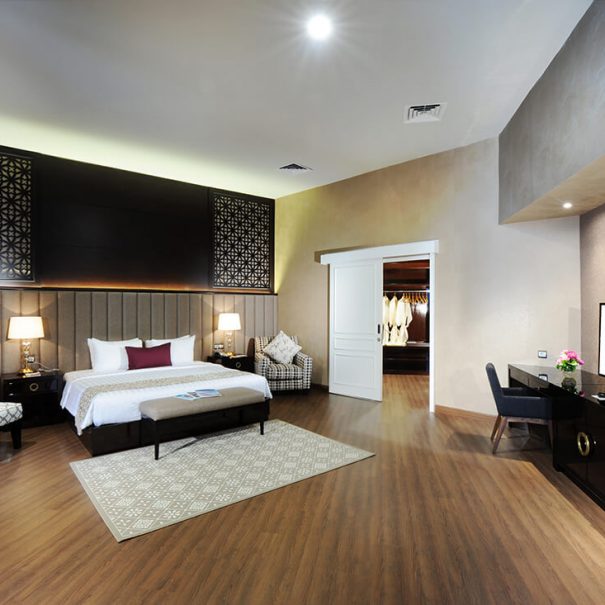 Our Discovery Suite offers commanding magnificent views over the Dunia Fantasipark and the city skyline. It is secludedly located on the 8th floor and designed in classic modern style. 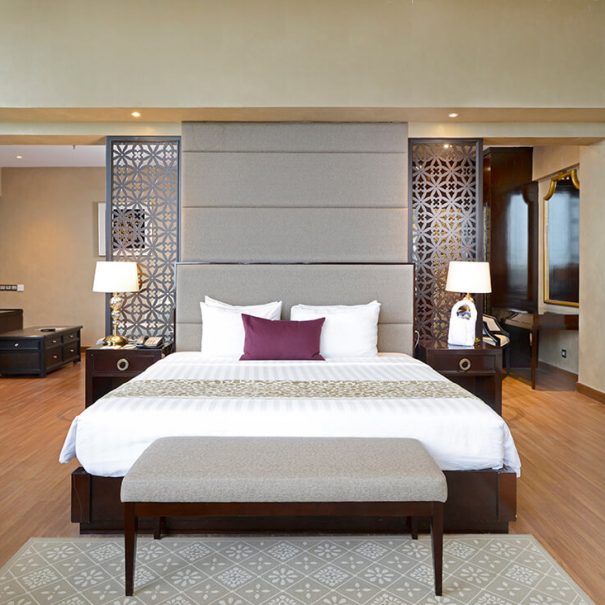 Our elegant Presidential Suite with two spacious bedrooms and connecting door to make it a 3-bedroom suite upon demand, is perched on the 8th floor and features a very cosy private balcony.

For your dining pleasure you have a choice of Kemang Restaurants, Kemang Lounge with various menu selections to suit every taste, appetite, occasion and celebration. 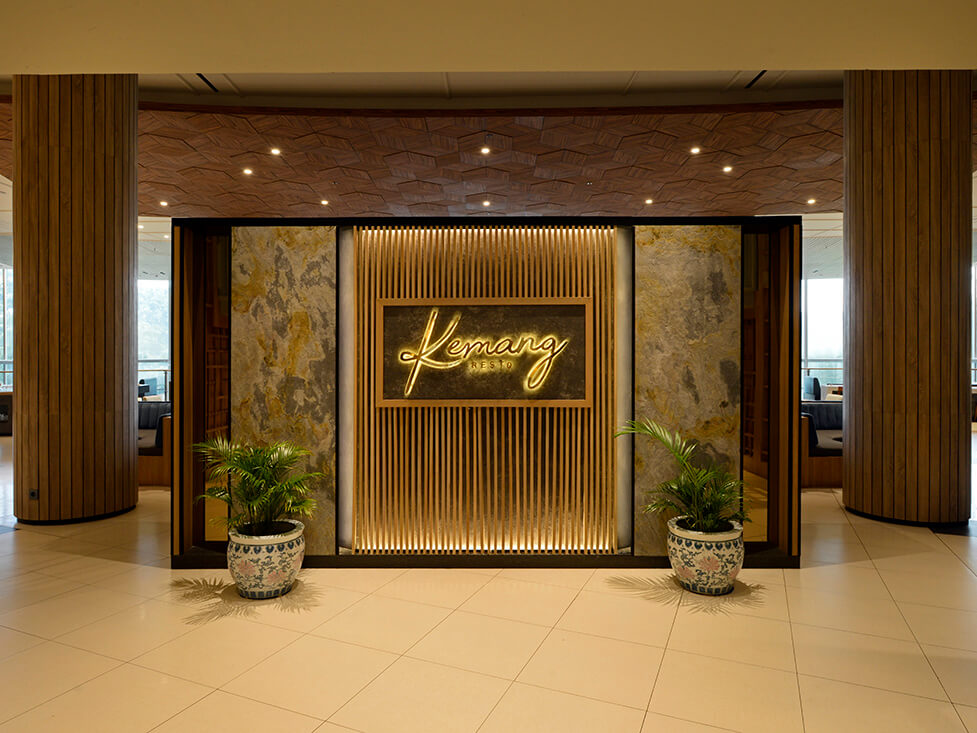 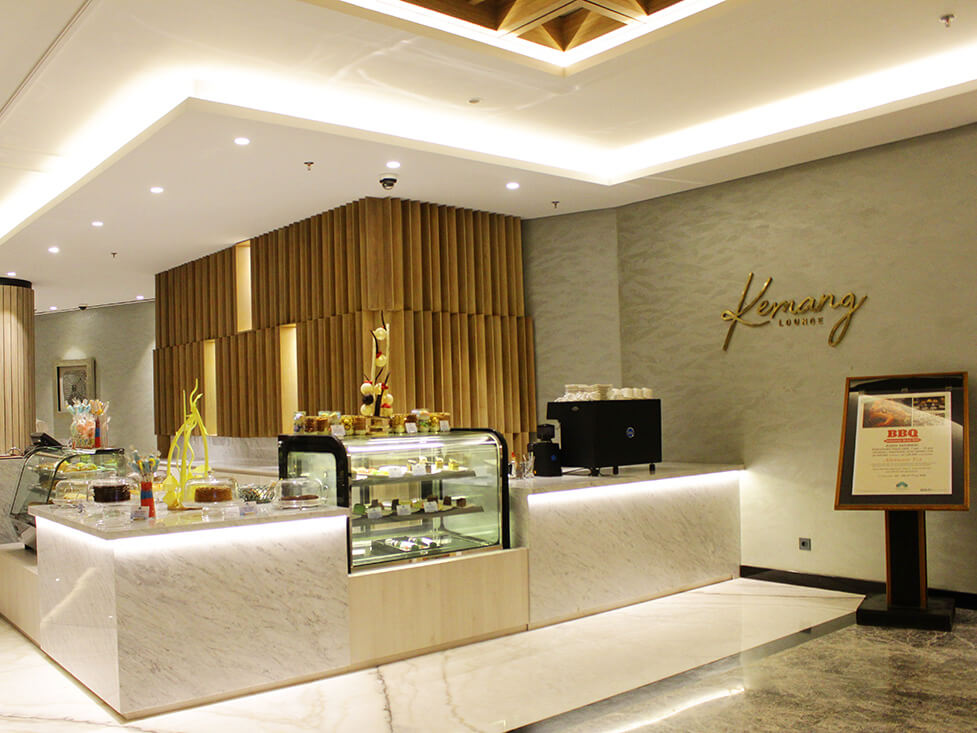 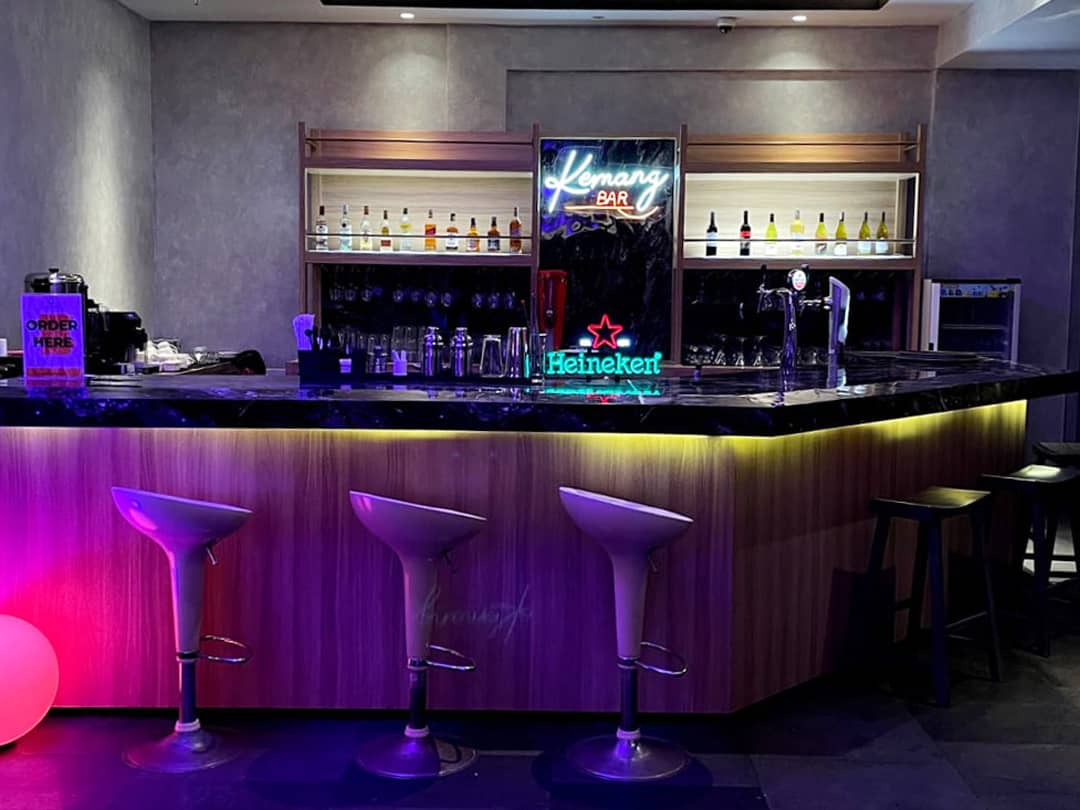 A true escape from the hustle and bustle of the streets – Overlooking magnificent pool views, Kemang Bar is the perfect place to unwind over beer, cocktail, coffee, smoke – and perfect for after work rendezvous or post dinner drinks with friends.

Discover perfect venues for meetings or special occasions, with the flexibility to choose from a variety of meeting room set-ups. Our wide range of recently refurbished facilities provides the ideal space whether you are organizing a small gathering, exhibition, conference, meeting, cocktail or wedding banquet. 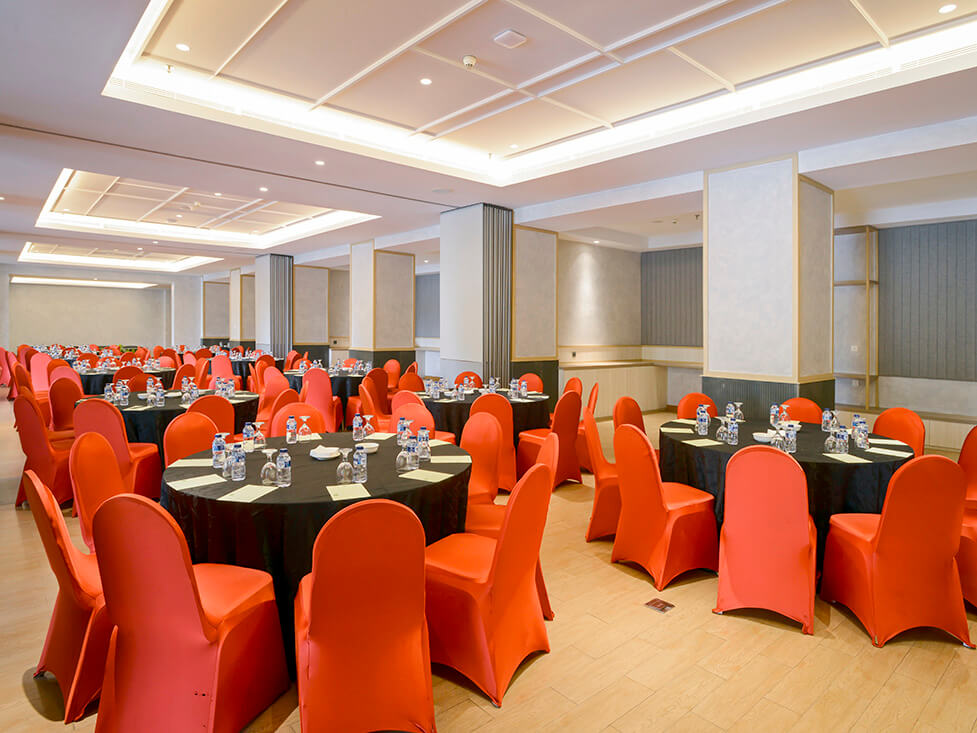 Discover perfect venues for meetings or special occasions, with the flexibility to choose from a variety of meeting room set-ups. Our wide range of recently refurbished facilities provides the ideal space whether you are organizing a small gathering, exhibition, conference, meeting, cocktail or wedding banquet.

Our Discovery Convention Center Ballroom is the perfect venue for impressive large-scale events such as conventions, conferences, exhibitions, and other mega-functions. It can comfortably accommodate up to 2,500 people in theatre-style seating. 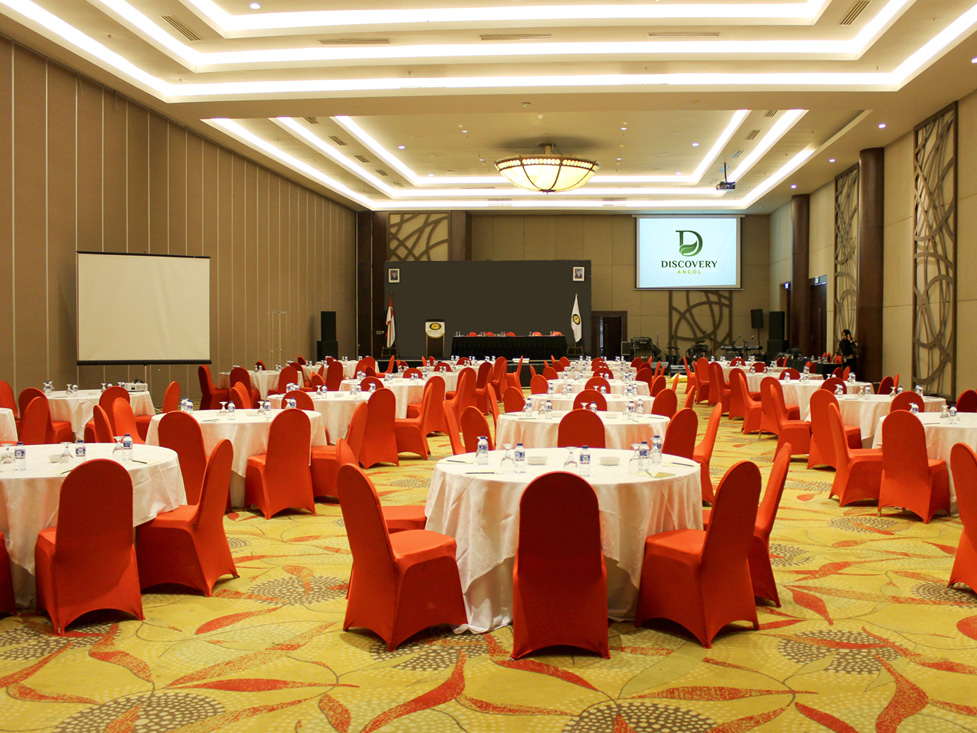 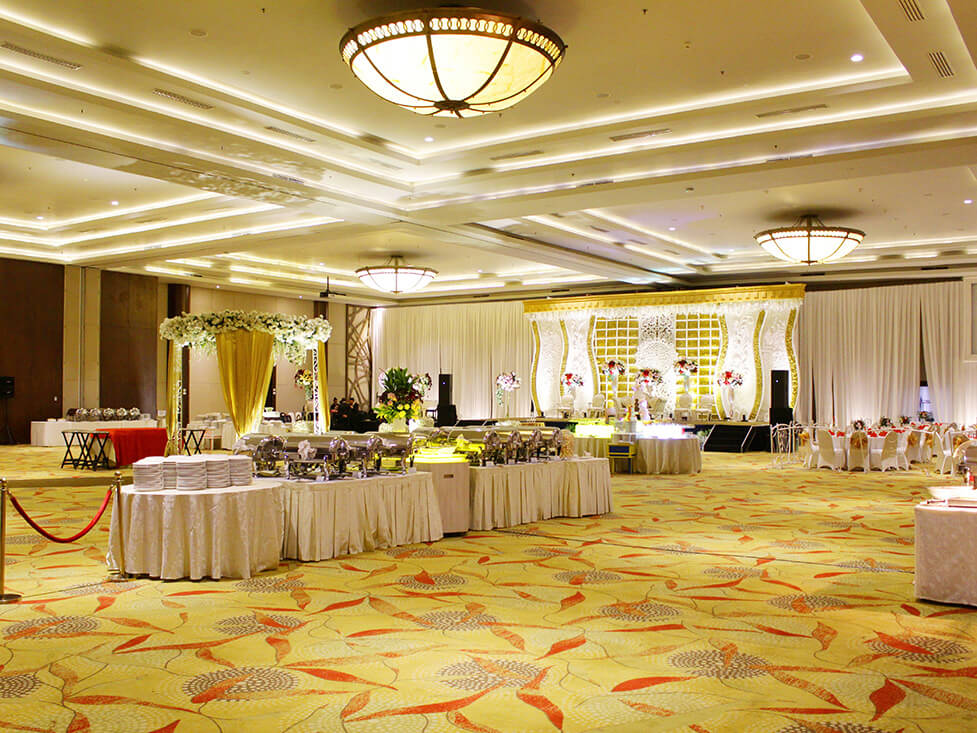 We believe the perfect moment begins with the perfect setting. Discover the perfect venue for your dream wedding at our luxurious and modern hotel. Our professional wedding planners will guide you through the process of selecting all the details to make a moment that will last a lifetime.

For your comfort, the range of services and facilities are tailored to appeal to families & friends, be your visit based on requirements for business or leisure.

Work out in the Discovery Gym & Spa, located by the...

Here at Kids World of Discovery Ancol, we love families and...

Find your Greens at Discovery Ancol, the geometrically-shaped of minigolf court... 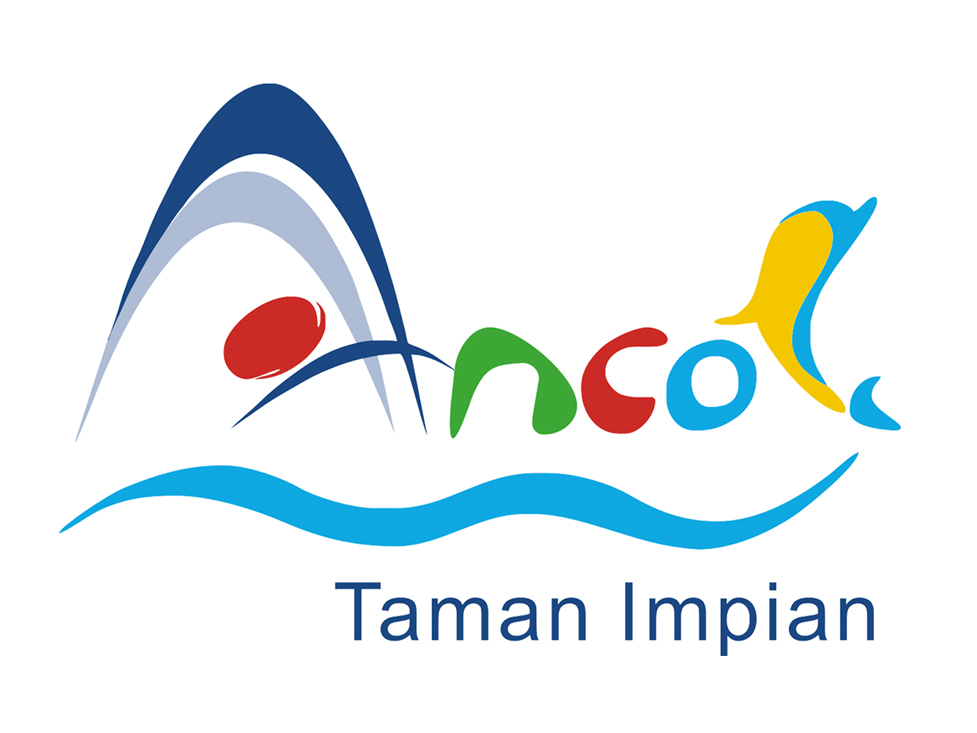 Taman Impian Jaya Ancol otherwise known as Ancol Dreamland is an integral part of Ancol Bay City, a resort destination located along Jakarta’s waterfront, in Ancol Kelurahan, Pademangan, Indonesia. It is owned by PT. Pembangunan Jaya Ancol Tbk, a subsidiary of Pembangunan Jaya Group. Ancol Dreamland opened in 1966 and is currently the largest integrated tourism area in South East Asia, boasting theme parks, hotels, beaches, a mall and other recreational facilities. There are 27 rides at Fantasy World, 8 pools at Atlantis Water Adventure and 8 shows at Ocean Dream Samudra. SeaWorld Aquarium with walk-through tunnel, cablepark waterski and gondola cabin-cablecar are further attractions, besides the art village “Pasar Seni” and the Ocean Ecopark as well as ABC Mall with outlets and F&B.

Fantasy world or more popularly known as Dufan, first opened to the public on August 29, 1985 and is the first theme park developed by the Company and has been certified ISO 9001: 2008 since 2009. In addition to being the center of outdoor entertainment, Dufan also is a physics edutainment area in Indonesia, pampering guests to a Fantasy Journey around the world, through high tech rides, divided into eight (8) region namely Indonesia, Jakarta, Asia, Europe, America, Greece, Saga, and Kalila. 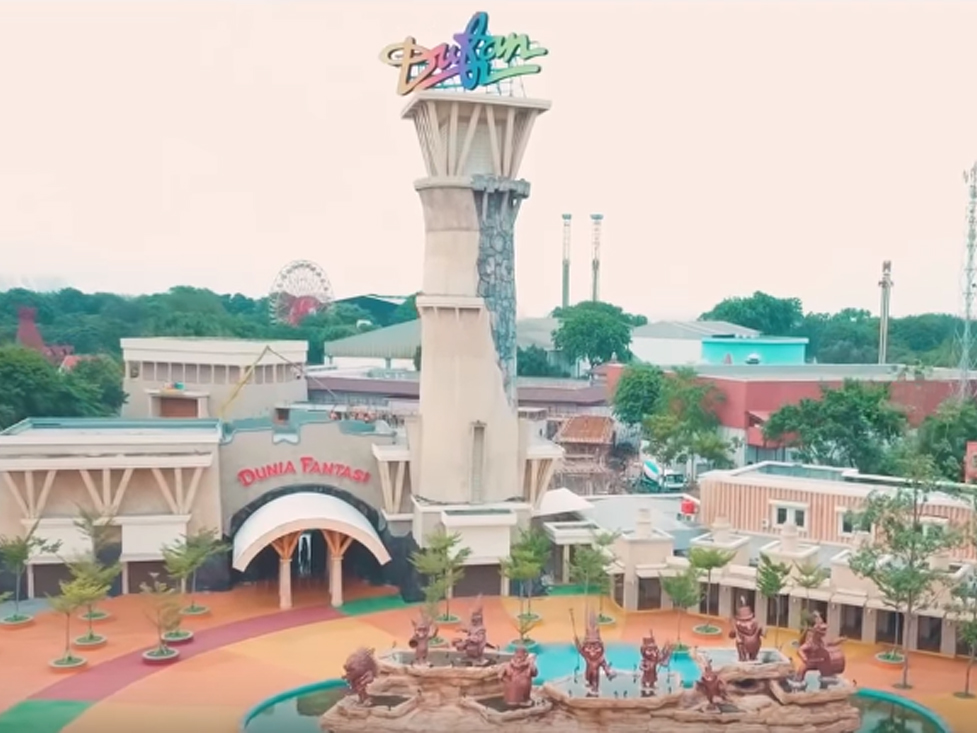 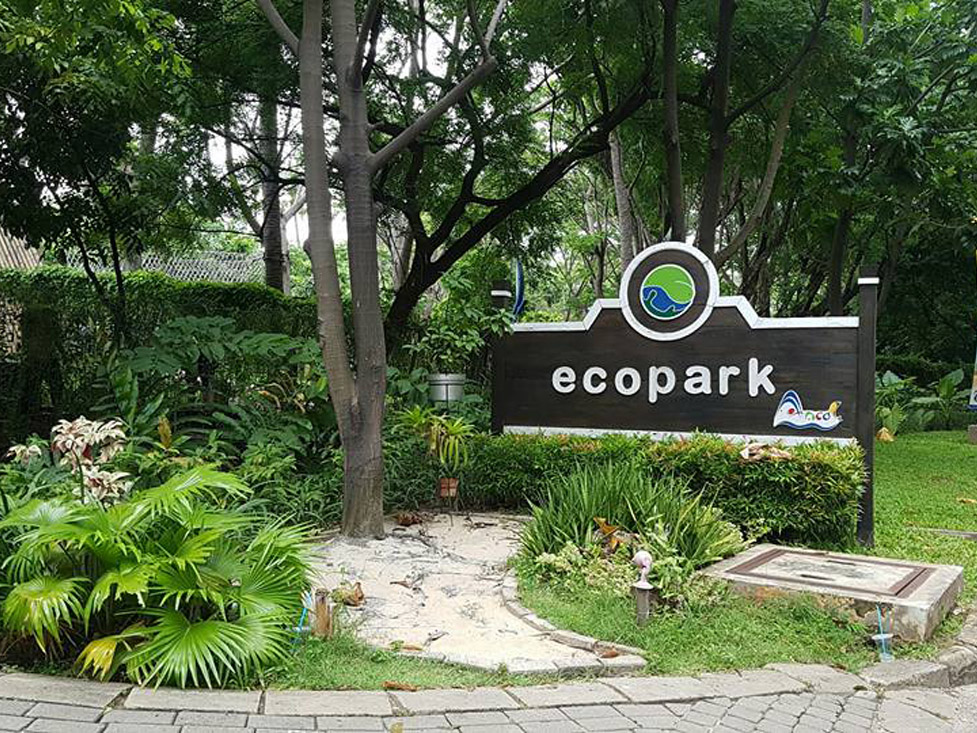 Ocean Ecopark is located in an area of nearly 34 hectares. Ocean Ecopark is the result of shifting the function of Ancol Golf Park. With a green lifestyle approach, Ocean Ecopark is an open space for visitors of Ancol Taman Impian to explore botanical knowledge and outbound recreation. Ecopark divides into different functions and facilities, such as Eco Care, Eco Nature, Eco Art, and Eco Energy zones. There are coastal vegetations throughout the zones to support the environment. These plants also serve to maintain Ecopark as green, lush area, emphasizes its function as complete and fun botanical learning center. To quench the visitors’ thirst for adventure. Jogging and bicycle tracks, a petting zoo, weekend sunrise aerobic and morning food stalls with local delicacies at affordable prices are found, as well as kids pedal boat rides.

This is one of the favorite shopping destinations in Jakarta. Located in the north of the capital, precisely on Jalan Mangga Dua Raya, Mangga Dua central business district is a place where you can buy a variety of goods ranging from electronics, clothing, souvenirs, clothing materials, to food and automotive. From opposite the hotel by public bus just one stop away by 4 lines which connect the city center with Ancol by Transjakarta Busway. Within a decade it became one of the most attractive trade centers not only in Jakarta but also in Indonesia. 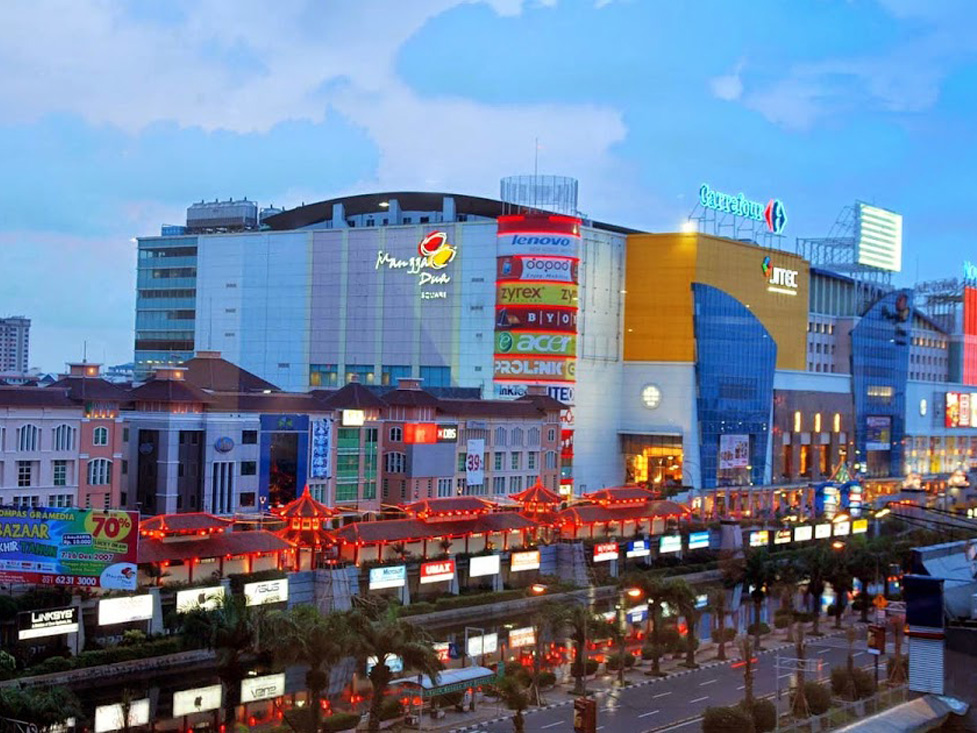 Our team is looking forward to hearing from you.